Defining, changing, and editing user permissions within your organization

Written by Fred Kunda
Updated over a week ago

User permissions allow you to customize access to your dashboard by different user types across your team. Here's a brief overview of what each level means:

Owner
This is an account owner and typically the initial user(s) who signed up for PINATA. They have access to all current and future programs (including those they themselves did not create), as well as all features and controls. They can also change the status of any user or remove any user from the organization.

Administrator
Much like an Owner, an Administrator has access to all current and future programs (including those they themselves did not create), as well as all features and controls. Admins can also change the status of any user (who is an Admin or below) and remove any user from the organization.

Manager
A Manager has full program control (including the ability to create new programs or edit existing ones) -- but only for those programs to which they are given access. Managers' program access can be selected from the My Company dropdown and designated by an Admin/Owner. Any new program they create will only be visible to them and Admins/Owners, but not other Managers. Managers can edit/invite users who have a status lower than their own, include Members and GoGetters.

Member
Members are users of your dashboard who do NOT have the ability to create new programs, but can still book gigs on the programs to which they are given access. Members' programs can be designated from the dropdown in My Company in the same manner as a Manager above. Members can only invite/edit GoGetters.

Here's an example of how you can change program access for Managers or Members. 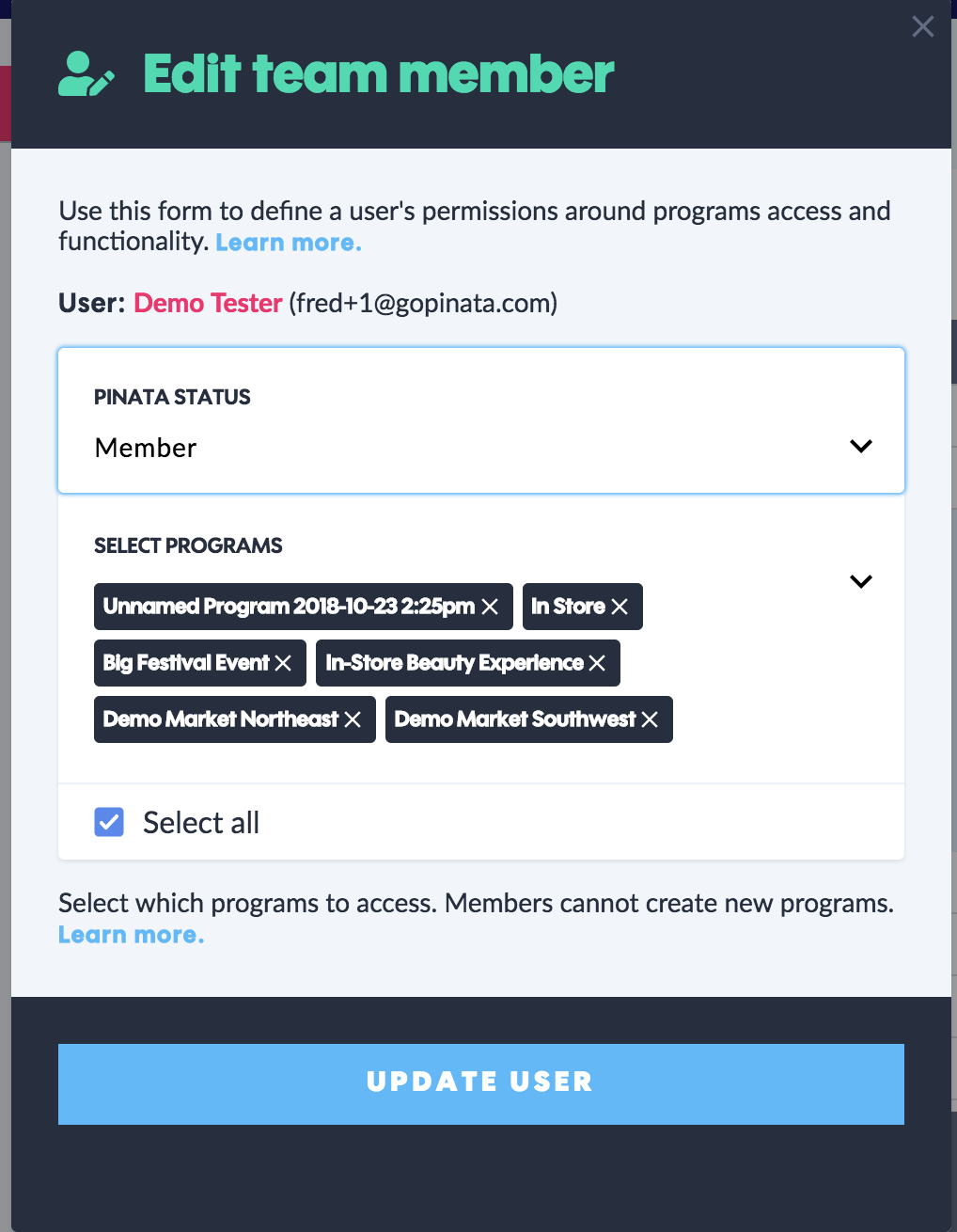 GoGetter (applies to self-service and agency)
A GoGetter is a member of your roster and can only perform gigs in the field. They cannot access your dashboard at all and can only be assigned gigs, check in, complete reports, and check out via gogetter.gopinata.com. These users have no visibility or control of any other user or gig other than to which they are assigned.

If you'd like to remove someone from your organization entirely, you can do so by selecting them in My Company and hitting "Remove". Once you confirm this action, this user will no longer be able to see/access anything on your dashboard.

NOTE: You are not allowed to remove a user who's permission status is higher than your own (ex: a Manager cannot remove an Administrator).

You can invite a new user to your organization and designate their permission level in one easy step. Under My Company, simply hit "Invite Team Members." After entering in the emails of those people, you can use this form to define their permissions. You can also change them later as we talked about above.

If the user's email is grey in the list of team members, this means they have not yet completed setting up their account from the invitation.

PRO TIP: You can create multiple users at once with the same permissions by entering all email addresses (one per line) and then selecting their user permission status.

Did this answer your question?